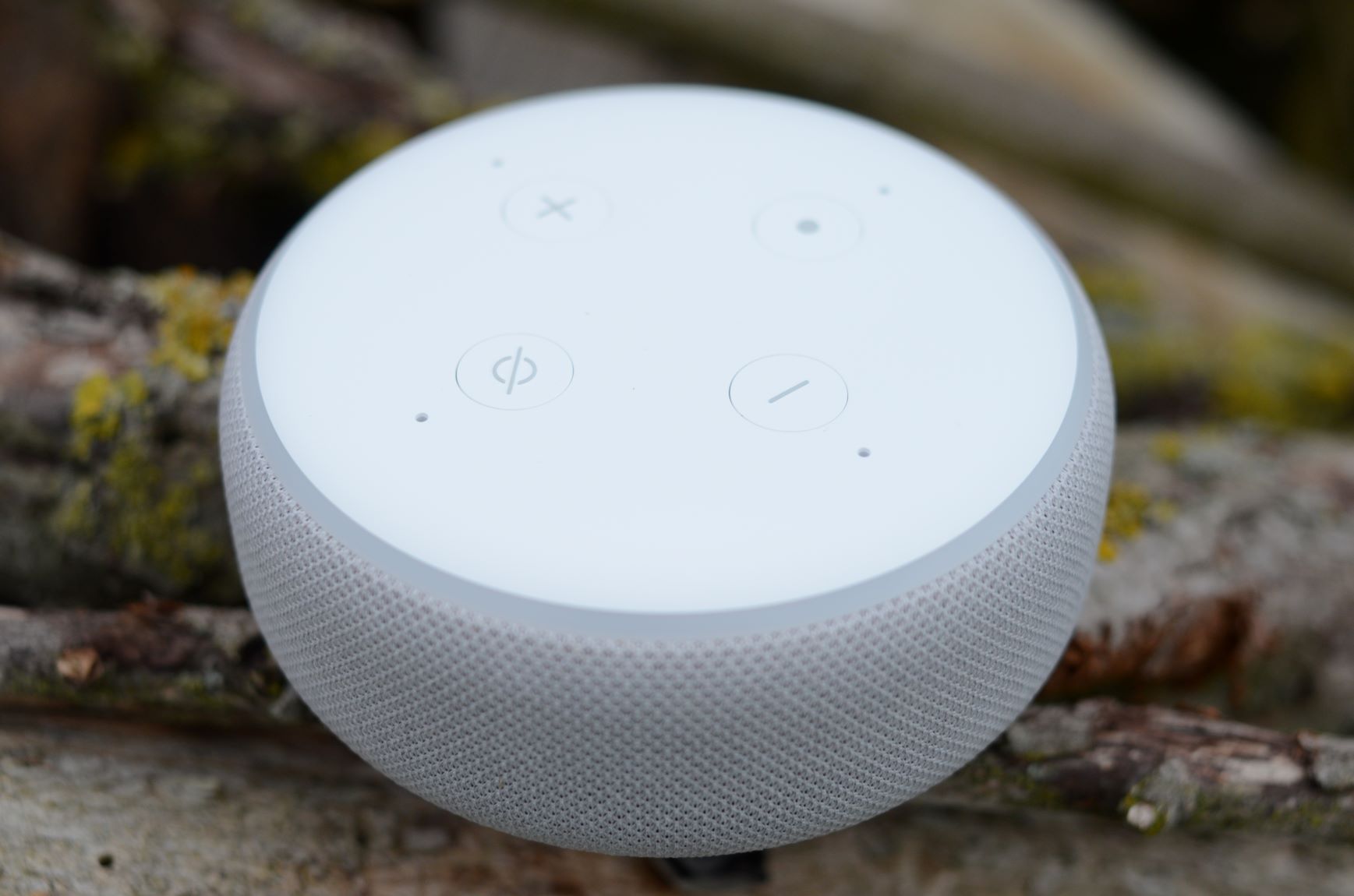 Echo Dot 3rd Gen is a step up in audio quality and as such offers even better value for money. Sound quality now acceptable for general music playback as well as the usual voice control goodness.

For 2018 the Echo Dot 3rd Gen has a larger more rounded design measuring 43 x 99 x 99mm. The 3rd Gen weighs in at 300 grams which is almost twice that of the previous models 163, this is obvious from the moment you handle the new device.

The styling is cleaner and more refined, mainly due to the speaker grills being hidden behind a fabric material. That fabric band which runs around the outside edge varies in colour depending on which model you purchase. The function buttons are more subtle in design and also smaller, ultimately this leads to them being slightly less convenient to use than the 2nd Gen.

Power to this new 3rd Generation Echo Dot is provided by the included adapter, signalling the end of Micro USB power for Echo devices. On the plus side the new 15 watt power adapter provides the Echo Dot with a much needed boost in speaker output. 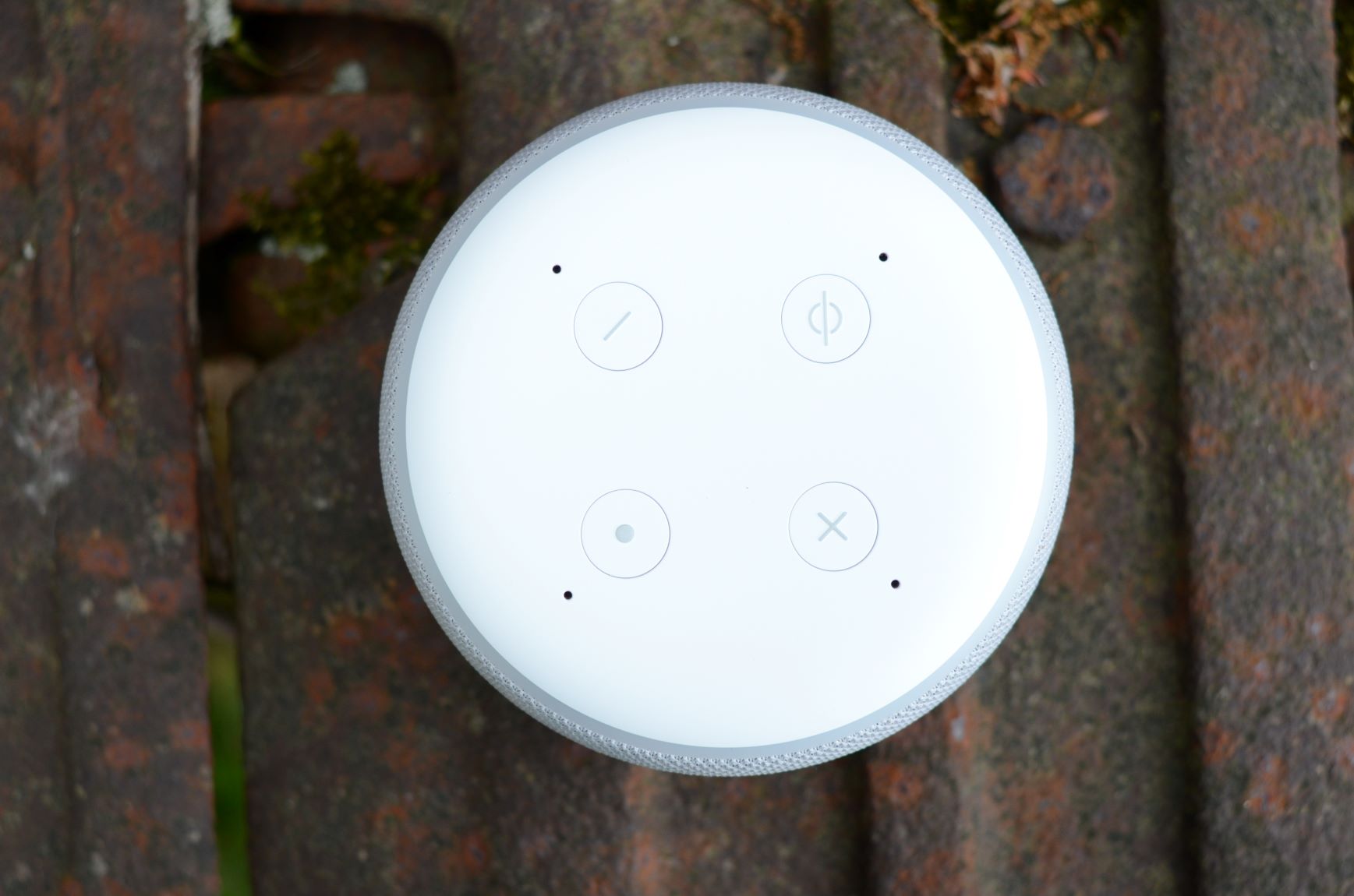 In an effort to give the consumer more choice, Amazon now offer the 3rd Generation Echo Dot in three colours, Charcoal Fabric, Heather Grey Fabric and Sandstone Fabric. Essentially this translates to Black, Grey and Light Grey with the latter having a white top panel. In our opinion the new model looks more subtle and less likely to stand out on your desk or table.

Function buttons as previously mentioned are a little smaller with a flush finish but they still have a positive feel and an audible click when pressed.

As a result the light ring is only properly visible in a darker room.

This latest generation retains the notification light ring around its top edge but also gains an ambient light sensor, with the latter being cleverly hidden within the action button. You would expect this to be a beneficial upgrade, sadly this isn’t quite the case, calibration for the sensor isn’t 100% at the time of writing. As a result the light ring is only properly visible in a darker room, once the sun comes up you will do well to see it as easily. I am hopeful this can be resolved in a future firmware update, it has already been brought to the attention of Amazon.

After you have removed the Echo and included cable from the packaging it will need plugging into a wall socket. Once powered up you open the Alexa App on your mobile device and follow the instructions to get the Echo connected to a wireless network. Most new owners should be fine with this procedure but some might need assistance to setup their Echo Dot.

Some users might also choose to connect their Echo to an external speaker. This can be done either using the 3.5mm output socket or via Bluetooth. Although with this new Echo Dot the sound quality is such that the need for an external speaker is less than the previous generation, more on that later. 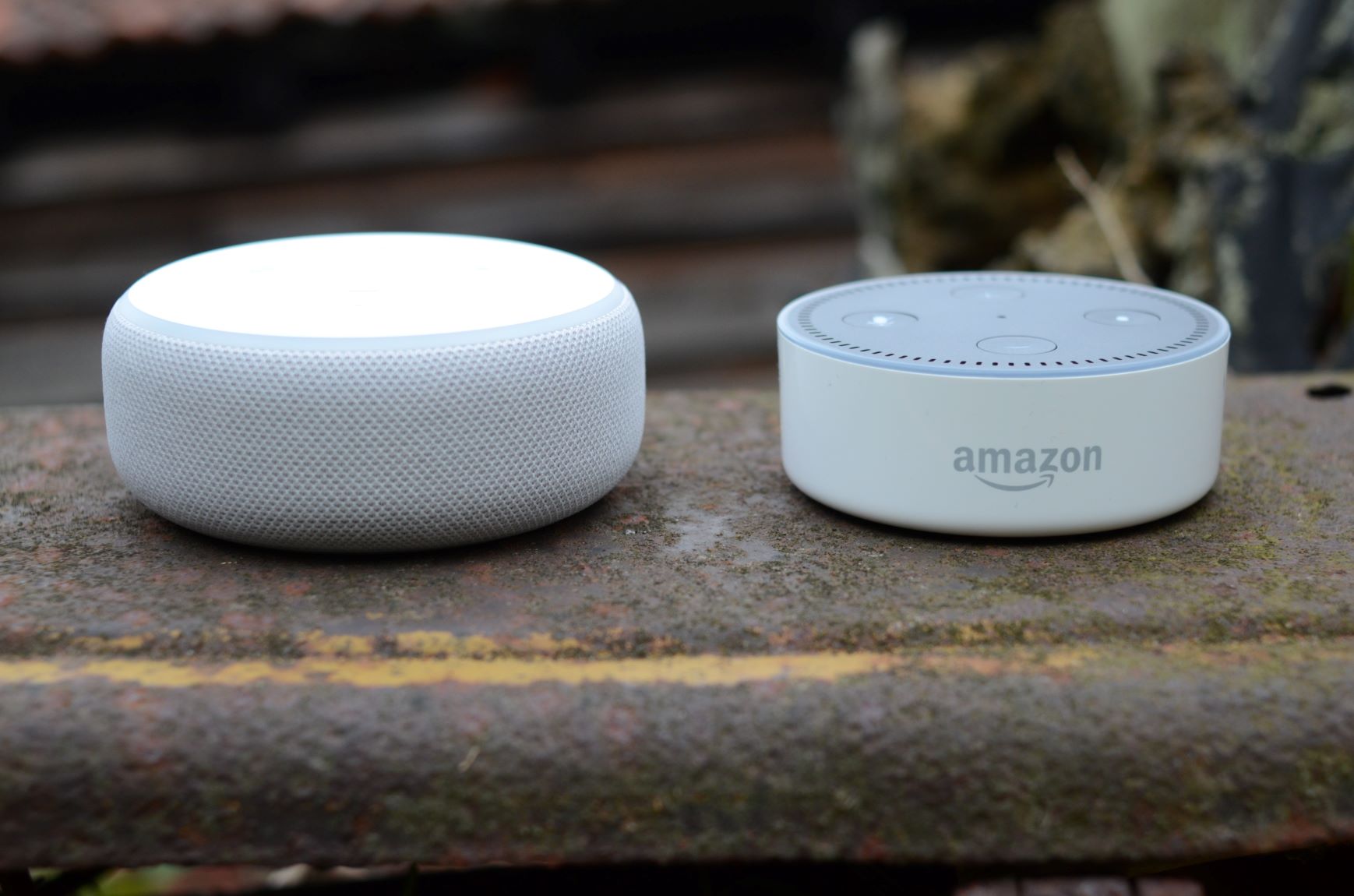 The whole concept of any Echo device is voice control and the new 3rd generation is just as good in this area. No voice training required, simply say the word ‘Alexa’ and ask away. The possibilities are almost endless: ‘Alexa, how is the weather’, ‘Alexa, remind me’, ‘Alexa, whats in the news’, to mention just a few. You can set timers and schedule reminders for everyday tasks, turn on the lights or adjust your heating temperature.

If you have Philips Hue lighting or a smart thermostat system then the voice commands expand even more. Utter the words ‘Alexa, turn the house lights on’ and almost like magic it is done. You can even dim the lights by saying ‘Alexa, house lights fifty percent’ – as the Echo range matures the commands will expand evermore. 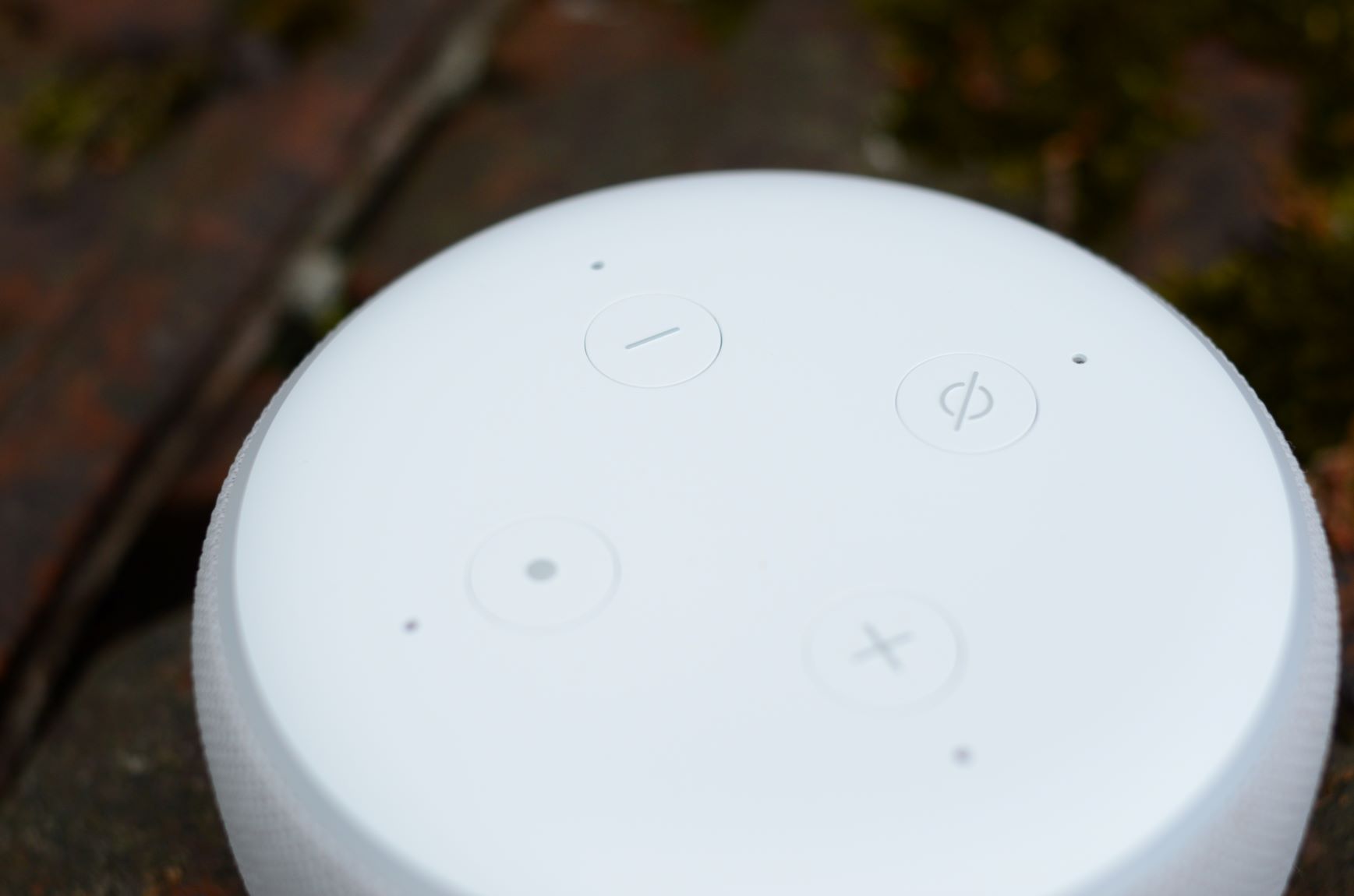 You ask a question or give a command and the Echo obeys. Default setting is for Alexa to confirm even a basic request with an ‘OK’. Most of the time Alexa will hear you first time around, on occasion a command might need repeating.

On this note we have to mention the new 4 microphone array, simply put, it is a downgrade compared to the 2nd Generation Dot, this is disappointing and noticeable when using the device from across the room. If some music is playing at normal volume or above you will need to talk loudly or shout quietly for Alexa to take note!

General sound quality is a big step up from the 2nd Generation, considerably so. The Echo Dot 3rd Gen gets loud enough to be heard across a large room, even into the next room. As with many audio devices it is wise not to turn the Dot up to full volume, stick to around 75% for minimal distortion.

Alexa’s Voice Quality on the new Echo Dot is a bit muffled compared to the previous model, this isn’t a show stopper by any stretch but it’s not ideal. When you give Alexa a command the response is clear enough but there is simply to much bass and not enough mid range – this can be corrected for music playback using the Alexa App but not for the default voice response.

The speaker arrangement in the Echo Dot is such that it produces 360 degree sound. Hearing Alexa should be easy no matter which part of the room you are in. As with many speakers, positioning is key to altering the sound – placing the speaker near a wall or hard surface enriches the bass, with the opposite achieved when the Echo Dot is in an open area. 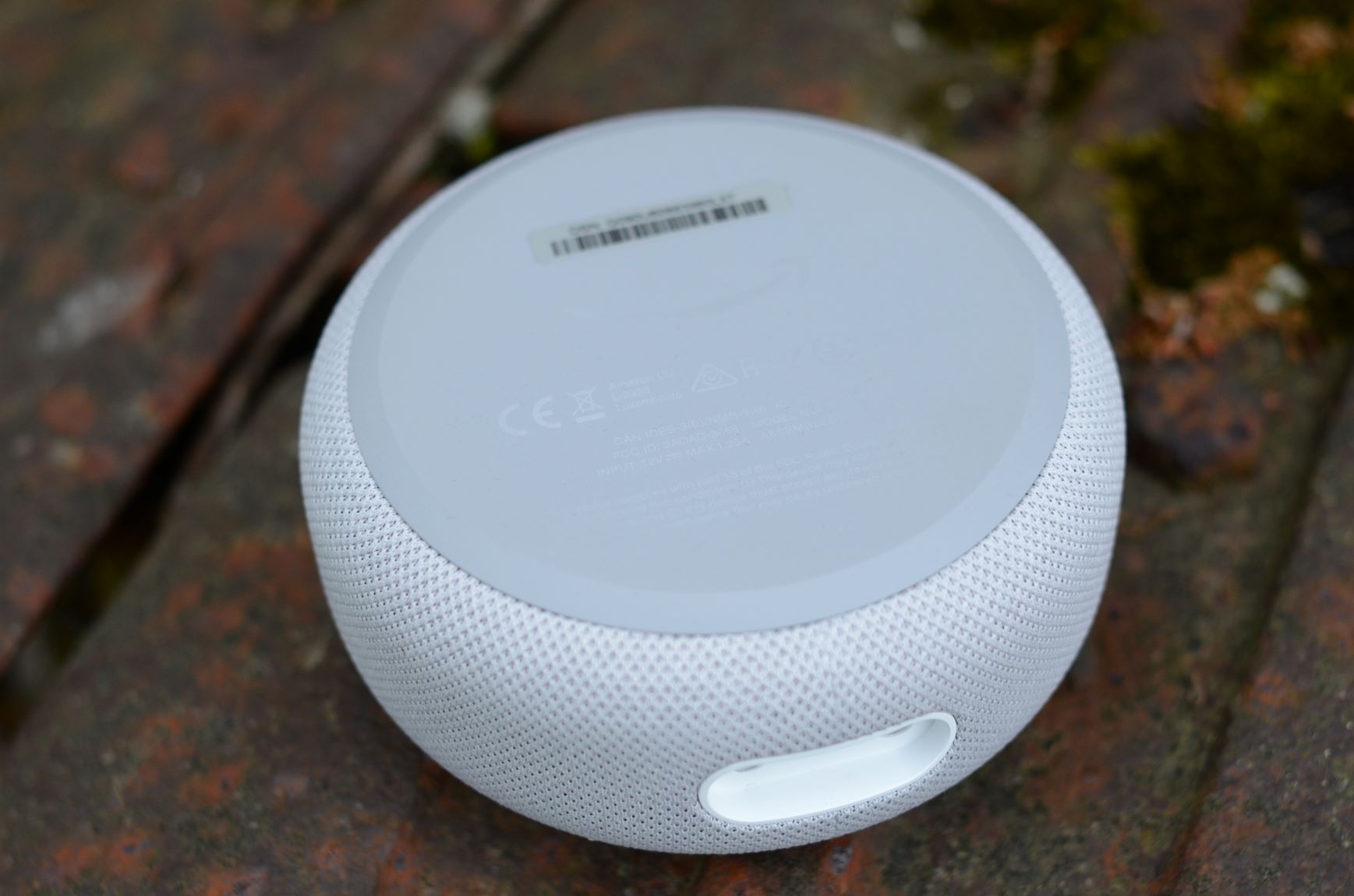 Rubber pad on the base of Echo Dot

So the Echo Dot 3rd Gen isn’t quite as clear as it could be with default responses, we are sure this is something Amazon can correct in a future update. Music Quality is where the 2018 Echo Dot improves the most, significantly so. Low and mid range output is transformed and the treble isn’t far behind.

All this means the Echo Dot is now capable of handling almost any music style up to medium volume with little in the way of distortion. We ended up adjusting the ‘Audio Controls’ via the Alexa app and reducing the bass whilst boosting the mid and treble for a more rounded sound.

Increase the volume above 50% on a bass heavy track and the Echo Dot 3rd Gen does begin to struggle, nothing you wouldn’t expect though at this price. Lower volumes cause little to no distortion and the mid range is well controlled, even the bass is pretty impressive.

With more mellow music though the Echo Dot reaches impressive volume levels, still managing to sound good. The new Echo Dot will easily out perform most standard portable radios and cheaper Bluetooth speakers, you cannot fail to be impressed. 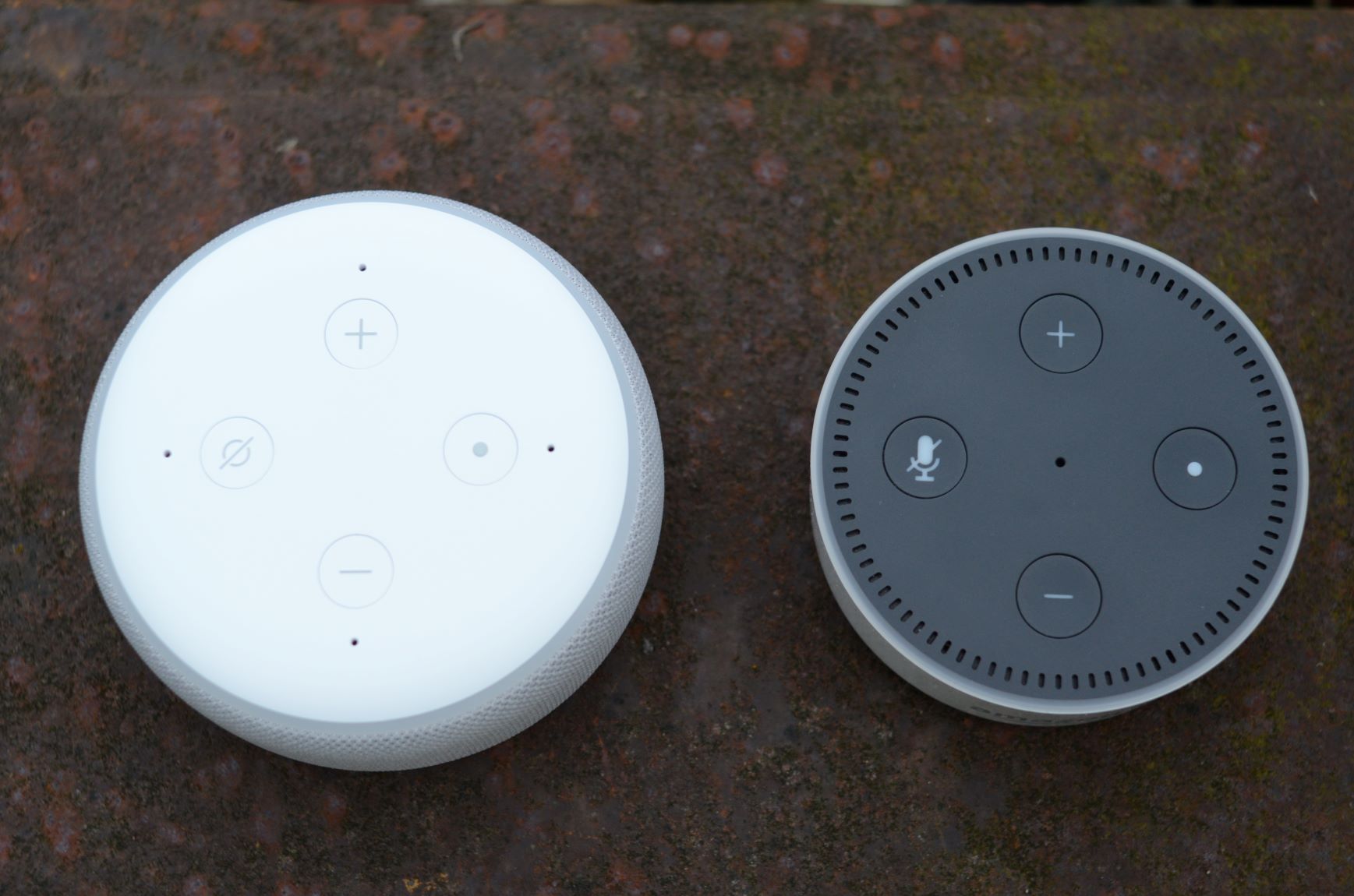 Should you buy the Echo Dot

Amazon’s Echo Dot 3rd Generation is an even more impressive effort than last years model. Even with no associated music subscriptions or smart lights the Echo Dot still offers some useful functions like radio, weather, news, timers and alarms.

For those looking to automate their Philips Hue light system even more the Echo Dot works well. Similarly with Smart Thermostats such as Nest the Echo Dot takes things a step further with full voice control.

As if that wasn’t enough for the £29.99 offer price, this incredible speaker will happily provide great quality background music whether you are washing up or entertaining guests. 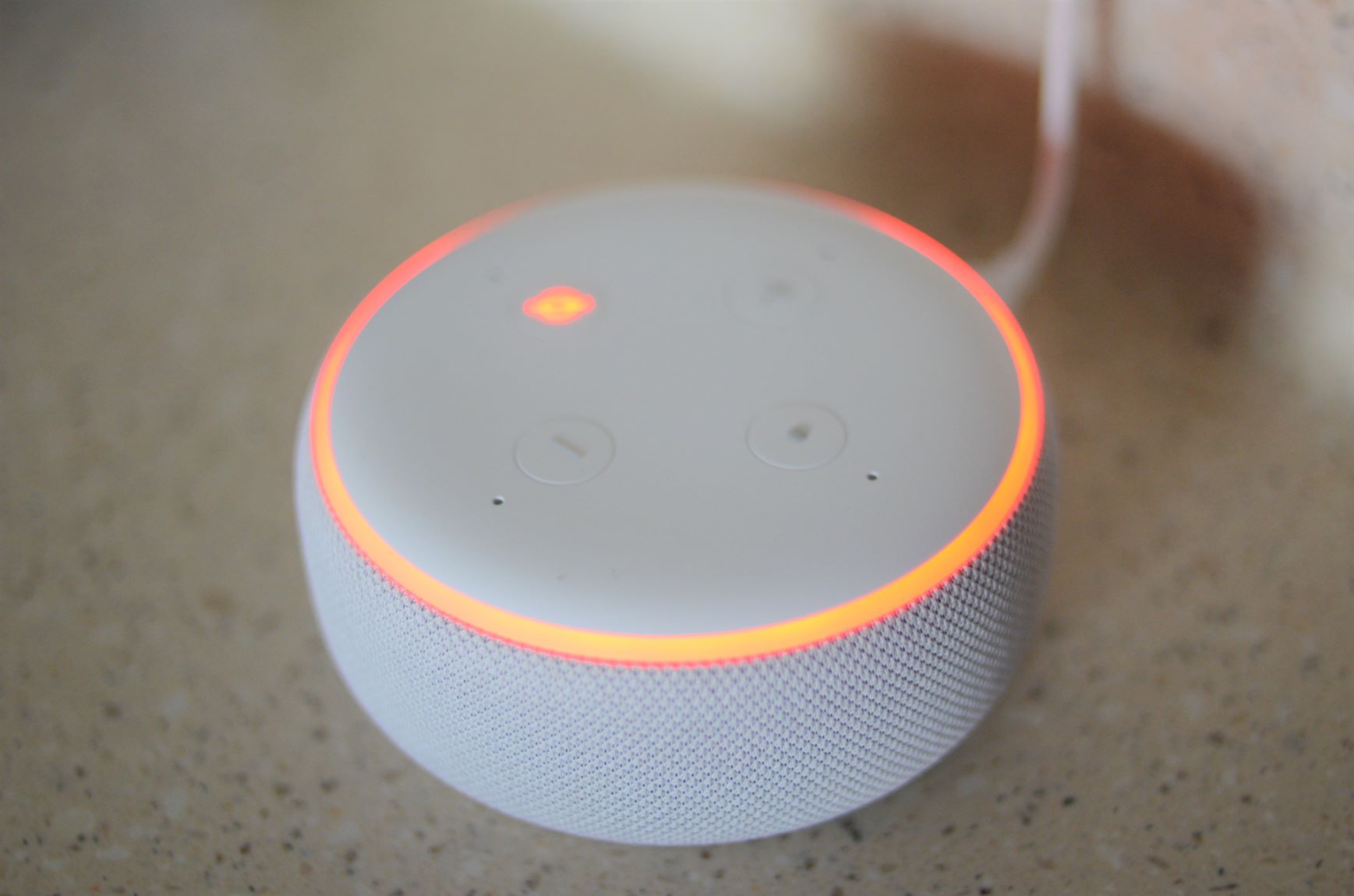 It is barely believable that for less than £30 you can purchase a voice controlled Bluetooth speaker which will replace a radio and in some cases even a small stereo system. All of this in a device small enough to fit in your pocket, yes, we can’t recommend it highly enough.

This website uses cookies to improve your experience while you navigate through the website. Out of these, the cookies that are categorized as necessary are stored on your browser as they are essential for the working of basic functionalities of the website. We also use third-party cookies that help us analyze and understand how you use this website. These cookies will be stored in your browser only with your consent. You also have the option to opt-out of these cookies. But opting out of some of these cookies may affect your browsing experience.
Necessary Always Enabled
Necessary cookies are absolutely essential for the website to function properly. This category only includes cookies that ensures basic functionalities and security features of the website. These cookies do not store any personal information.
Non-necessary
Any cookies that may not be particularly necessary for the website to function and is used specifically to collect user personal data via analytics, ads, other embedded contents are termed as non-necessary cookies. It is mandatory to procure user consent prior to running these cookies on your website.
SAVE & ACCEPT